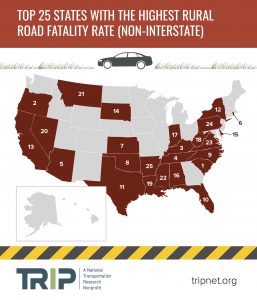 The importance of the rural transportation system as the backbone of the nation’s energy, food and fiber supply chain has been heightened during the response to the COVID-19 pandemic. Addressing the nation’s rural transportation challenges will require a significant increase in investment, but the tremendous decrease in vehicle travel that has occurred due to the COVID-19 pandemic is estimated to reduce state transportation revenues by at least 30 percent – approximately $50 billion – over the next 18 months.

The chart below ranks states based on their rate of rural pavements in poor condition, share of rural bridges that are rated poor/structurally deficient, and fatality rates on non-Interstate, rural roads. 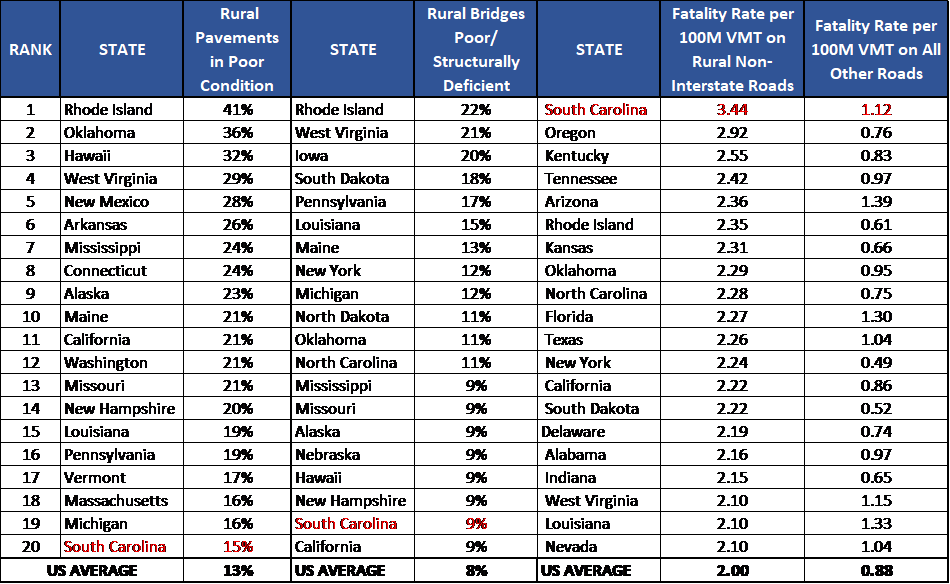 The report finds that the rate of traffic fatalities on South Carolina’s non-Interstate, rural roads is significantly higher than the fatality rate on all other roads in the state – 3.44 fatalities per 100 million vehicle miles of travel vs. 1.12 – and is the highest in the nation. Rural roads are more likely to have narrow lanes, limited shoulders, sharp curves, exposed hazards, pavement drop-offs, steep slopes and limited clear zones along roadsides. There were 593 fatalities on South Carolina’s non-Interstate, rural roads in 2018. South Carolina’s rural roads and bridges have significant deficiencies. Fifteen percent of South Carolina’s rural roads are rated in poor condition – the 20th highest rate in the nation- and 23 percent are in mediocre condition. Nine percent of South Carolina’s rural bridges are rated in poor/structurally deficient condition, the 19th highest rate in the nation. Bridges rated poor/structurally deficient have significant deterioration to the major components of the bridge and are often posted for lower weight or closed to traffic, restricting or redirecting large vehicles, including agricultural equipment, commercial trucks, school buses and emergency services vehicles.

“Rural road safety continues to be a priority in South Carolina. Three years into the state’s ten-year plan, safety specific improvements have been addressed on approximately 400 miles of rural roads,” said Jennifer Patterson, executive director of the South Carolina Alliance to Fix Our Roads. “During a time when it seems as if life has come to a halt, road work has not. We are thankful to the men and women who are working to ensure repairs and improvements to our roads and bridges continue moving forward. South Carolinians, our economy, and our ability to move past this crisis are riding on the essential work that they do.”