The chart below ranks states whose Interstate systems are the most congested, have experienced the greatest increase in vehicle miles of travel (VMT) since 2000, carry the greatest share of commercial trucks, have the largest share of pavement in poor condition and bridges in poor/structurally deficient condition, and have the highest fatality rate. Data for all states can be found in the Appendix.

According to the TRB report, the U.S. Interstate system has a persistent and growing backlog of physical and operational deficiencies as a result of age, heavy use and deferred reinvestment, and is in need of major reconstruction and modernization. The TRB report concludes that annual investment in the Interstate Highway System should be increased approximately two-and-a-half times, from $23 billion in 2018 to $57 billion annually over the next 20 years.

“South Carolina’s economy runs most safely and efficiently for cars and trucks – whether for commuters, tourists, or businesses – with a modern and well-maintained Interstate system,” said Rick Todd, president and CEO of the South Carolina Trucking Association. “For commerce, whether by car or truck, the safest and most efficient Interstate System is one that provides for structural integrity, capacity, and safety. The longer Congress kicks the can down the deteriorating road, the more expensive and divisive it’s going to be for the nation and the states.”

“The report released by TRIP confirms what American businesses experience every day—our Interstate highway system, which was once the envy of the world, is in serious need of modernization,” said Ed Mortimer, vice president of transportation infrastructure, U.S. Chamber of Commerce. “Commitment to modernization must be shared by federal, state and local leaders as well as the private sector. The Interstate system plays a key national role in economic success and quality of life for every American, and we continue to urge bipartisan solutions to address this critical issue.”

The TRIP report found that since 2000, travel on the U.S. Interstate system, the importance of which has been heightened during the COVID-19 pandemic, has increased at a rate nearly triple that at which new lane capacity is being added. In South Carolina, 49 percent of urban Interstate highways are considered congested during peak hours, the 18th greatest share in the U.S. Vehicle travel on South Carolina’s Interstates increased 35 percent from 2000 to 2018, the 12th fastest rate in the nation. Nine percent of Interstate travel in South Carolina is by combination trucks.

“A safe and well-maintained Interstate Highway System can strengthen America’s economy, enhance personal mobility and facilitate more efficient movement of goods, but the future of this network could be in jeopardy without increased federal investment,” said Kathleen Bower, AAA senior vice president of public affairs and international relations. “All states benefit from a modern, accessible Interstate Highway System. AAA urges Congress and the current administration to prioritize transportation investments to ensure safe, efficient and reliable mobility across the United States.”

TRIP’s report finds that while pavement smoothness on most segments of the U.S. Interstate system is acceptable, the crumbling foundations of most highway segments need to be reconstructed, and that continued resurfacing rather than addressing underlying foundational issues provides diminishing returns and results in shorter periods of pavement smoothness.

“With the expiration of the FAST Act rapidly approaching, this report reaffirms how critical it is for lawmakers to prioritize reauthorizing a long-term, fully funded federal highway program this year,” said Rod Schrader, chairman and CEO of Komatsu’s North American operations and chair of the Association of Equipment Manufacturers CE Sector. “Meeting the critical equipment and supply needs of essential industries including construction and agriculture requires a dependable, modernized national transportation network. Equipment manufacturers are working hard to keep these vital industries properly supplied in the midst of COVID-19 and we need lawmakers to do their part to support these essential supply chains now and for the long haul.”

The ability of states to invest in Interstate highway repairs and improvements will be hampered by the tremendous decrease in vehicle travel that has occurred due to the COVID-19 pandemic, which is estimated to reduce state transportation revenues by at least 30 percent – approximately $50 billion – over the next 18 months.

Based on the findings of the TRB Interstate report, TRIP has provided a set of recommendations for the restoration of the Interstate Highway System, which includes:  the foundational reconstruction of Interstate highways, bridges and interchanges; improvement to roadway safety features; system right-sizing, including upgrading of some roadway corridors to Interstate standards; adding needed additional highway capacity on existing routes; adding additional corridors; and, modifying some urban segments to maintain connectivity while remediating economic and social disruption. 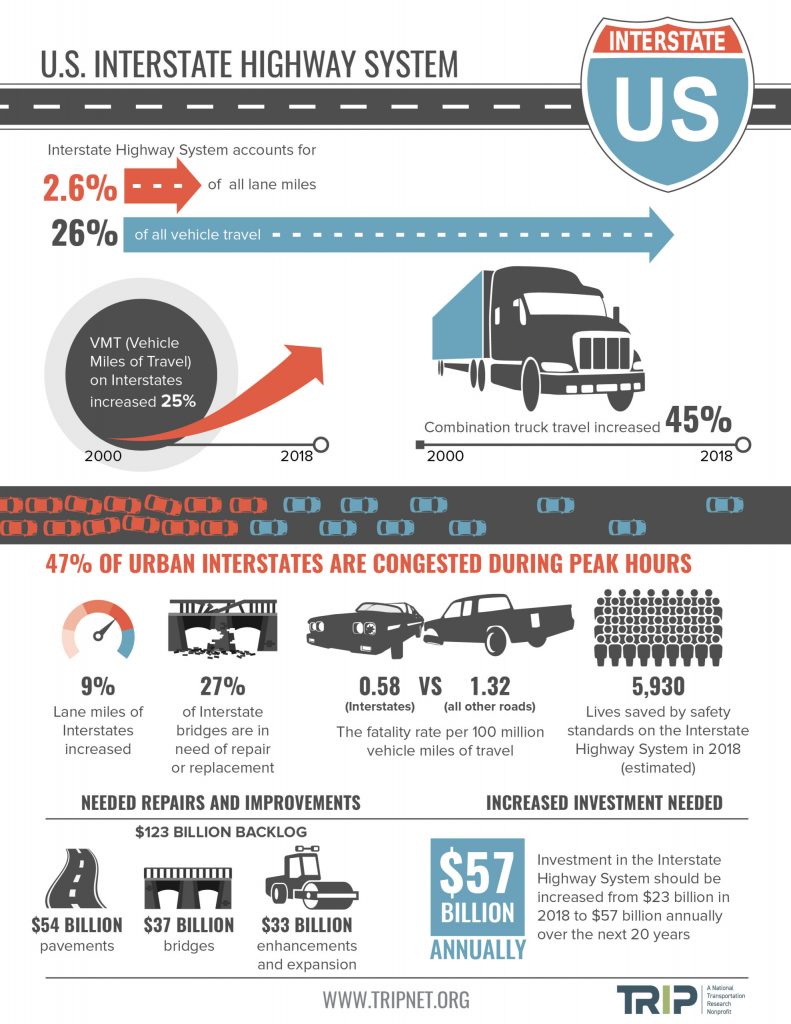