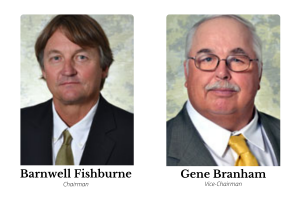 The SCDOT Commission held their first meeting of the new year on January 21, and the key item on the agenda was the election of officers.

Prior to the close of the meeting, Chairman-elect Fishburne said that public trust is a Commission priority, and he looks forward to 2021 (and its challenges) and plans to give it his all as Chairman.

SCFOR congratulates Commissioners Fishburne and Branham and we look forward to working with them in their new leadership roles.