South Carolina continues to grow. Despite population increases, the number of vehicles on the road, and vehicle miles traveled, funding for transportation infrastructure does not inherently benefit from this growth. In fact, revenues may become more volatile in the future with continued improvements in fuel economy, inflation, and the anticipated growth of the electric vehicle market.

So how will South Carolina adapt and fund a growing state economy in the future? A special Senate Finance Subcommittee initiated that discussion this week.

Chairman Davis said that the government is often criticized for not looking forward and only acting on issues when there is an immediate need. However, the purpose of this subcommittee is to be proactive and begin to look at the impacts that a changing economy and consumer preferences will have on the future of transportation funding in South Carolina – specifically when it comes to alternative and electric vehicles.

Secretary Hall provided Subcommittee members with a thorough overview of SCDOT’s finances and priorities. Thanks to Act 40 and the increase and diversification of revenue streams, the state is now in a good position to determine investment priorities and not be overly reliant on federal funds (and the strings attached to them). Having diverse revenue streams was also crucial in helping the agency weather the pandemic.

Secretary Hall pointed out that some revenues have performed better than others. Collections of the infrastructure maintenance fee ($500 car tax), alternative vehicle fees, and registration fees have been higher than estimates. However, gas taxes have not met revenue forecasts for the past couple of years.

The Changing Nature of the Gas Tax

Historically, “gas taxes” are based on the assumption that a vehicle’s fuel consumption offsets the wear and tear on the road. It has long been considered the ultimate user fee – equitable, efficient, easy to administer, and impossible to evade. The more you drive, the more you pay. However, several factors contribute to the diminishing buying power of the gas tax: inflation, continuous improvements in fuel economy, and the push for alternative and electric vehicles.

Several states have opted to address the inflation factor by indexing their user fees/taxes on fuel. For example, if South Carolina’s fuel tax (which is still among the lowest in the southeast) kept up with the rate of inflation and population growth, it would bring in $6.7 million more per penny than it generates now.

It is a little more challenging to tackle fees on alternative vehicles to ensure that drivers are paying their fair share to use the roads. South Carolina recognized this in 2017 and was among the first southeast states to impose a fee on alternative vehicles ($60 for hybrids/$120 for electric). However, because these fees are assessed biennially, South Carolina has the lowest fee compared to sister states.

Just to put things in perspective, if South Carolina’s electric vehicle fees were calculated on a basis to determine actual gas usage equivalent, fees would need to be around $250 annually. 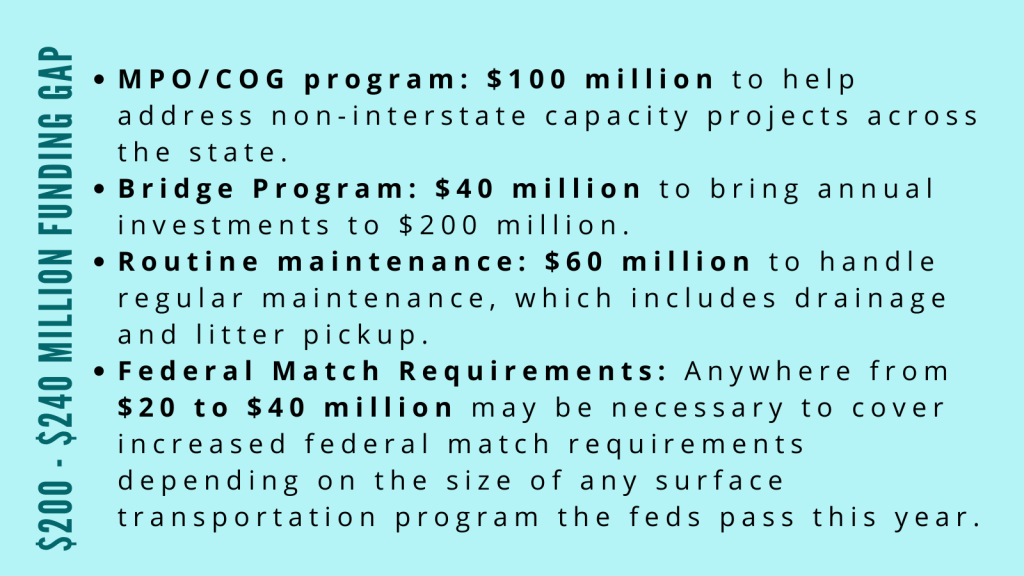 These gap numbers align with the funding needs included in the menu of options given to the legislature in 2017 during the Act 40 debate. In addition, these gaps are contingent on the SCDOT maintaining the same level of discretion/flexibility with federal dollars.

The subcommittee will work to schedule meetings through the summer and fall to continue to discuss potential policy changes associated with the growth of the electric vehicle market in the future. SCFOR will continue to follow.

SCFOR applauds the creation of this subcommittee as it demonstrates foresight and a long-term commitment to infrastructure. If there is anything that we learned from 2017, South Carolina cannot afford to wait. We need to be proactive about infrastructure – and this subcommittee is timely because there are many factors to consider regarding the impacts of the electric vehicle market on South Carolina. We appreciate the Senators’ willingness to initiate the conversation early.