Governor Henry McMaster announced September 2 that he believes the legislature should use $360 million in American Rescue Plan (ARP) funding to expedite widening I-26 – specifically, closing the gap between Columbia and Charleston.

Governor McMaster was joined by Secretary of Transportation Christy Hall and representatives from the SC business community to make the announcement. 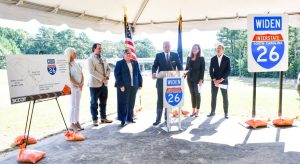 This segment of interstate remains a high priority of the agency because of the heavy congestion, delay, and accidents on a routine basis.

“With this bold plan proposed by the Governor, this one-time funding boost will accelerate this project forward by at least six years,” said Secretary Hall.

Chairman of the SC Manufacturers Alliance, April Allen, who is employed by Continental, expressed support for improvements to I-26. “To maintain and growing our business to meet the demand of our customers, we must have the ability to move our raw materials, our finished products, both domestically and internationally…that’s why today’s announcement of this investment to improve this section of I-26 is so very important,” said Allen.

Shawn Godwin, President & CEO of Palmetto Corp., currently serves as the Chairman of the SC Trucking Association. He expressed the importance of modernizing I-26 to serve the supply chain and move freight and people safely and efficiently. Godwin noted that trucks move about 75% of all cargo from the SC Port and 94% of all manufactured goods in the state.

“Our elected officials have recently dedicated funding for the deepening of South Carolina’s shipping highway, the Charleston Harbor, now we urge them to do the same for I-26,” said Godwin. He went on to encourage legislators to follow Governor McMaster’s lead to “improve the critical lifeline that is I-26.”

South Carolina has estimated approximately $453 million in revenue loss due to the pandemic, which includes $156 million attributed to SCDOT losses. Legislators continue their discussions of how the funds should be allocated. Governor McMaster plans to release his complete list of recommendations soon.