The increased transportation funding provided by the South Carolina legislature’s passage of the 2017 Roads Bill (Act 40) has allowed South Carolina to move forward with numerous projects to improve safety and accelerate road and bridge repairs. But the state still faces challenges maintaining its aging system and reliably accommodating growing passenger and freight traffic to serve the needs of the state’s growing economy, according to a new report released today by TRIP, a Washington, DC, based national transportation research nonprofit. 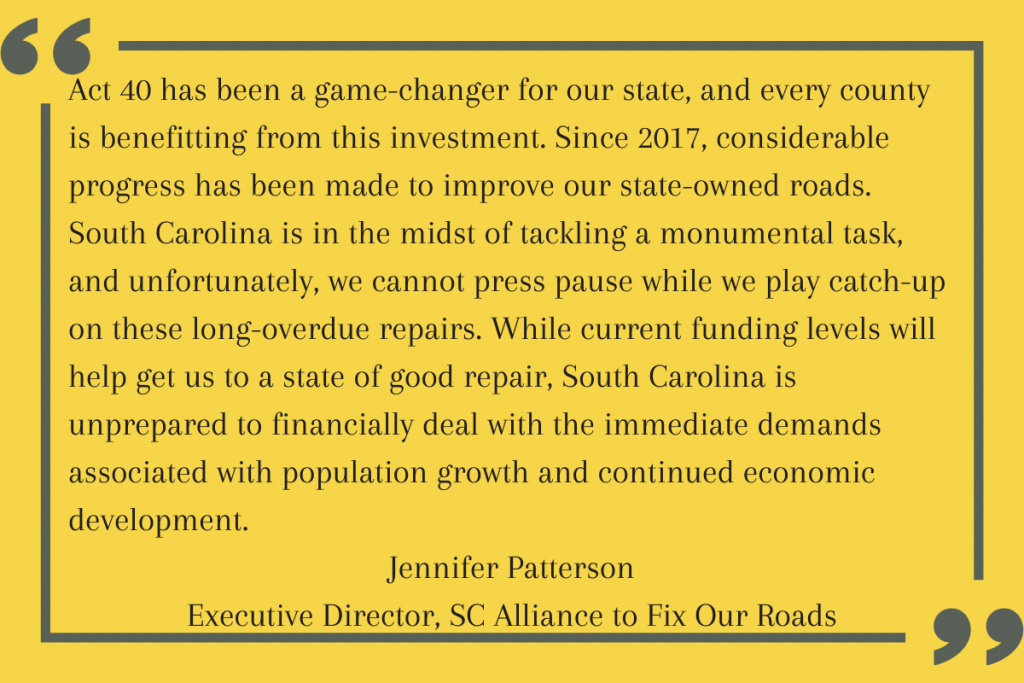 With South Carolina’s population expected to increase to approximately 6.4 million people by 2040, and vehicle travel growing at the fifth highest rate in the nation from 2014 to 2019, the TRIP report finds that congestion is worsening, costing South Carolina drivers a total of $2.1 billion each year in the form of lost time and wasted fuel – as much as of $1,165 per driver in some urban areas. South Carolina drivers lose as many as 56 hours and waste up to 22 gallons of fuel annually as a result of congestion. A full list of the most congested Interstate segments in the state is included in the report. Due to the COVID-19 pandemic, vehicle travel in South Carolina dropped by as much as 37 percent in April 2020 (as compared to vehicle travel during the same month the previous year) but rebounded to four percent above June 2019 volume in June 2021.

The efficiency and condition of South Carolina’s transportation system, particularly its highways, is critical to the health of the state’s economy. Annually, 465 million tons of freight are shipped to, from or through South Carolina, an amount that is anticipated to grow by 65 percent by 2040. Accommodating the significant increase expected in the movement of truck freight in South Carolina will be further challenged by the significant number of freight routes in the state that are constrained because they have inadequate load carrying capacity to accommodate large trucks. The TRIP report includes a list of the worst highway freight bottlenecks in South Carolina. Regions with congested or poorly maintained roads may see businesses relocate to areas with a smoother, more efficient and more modern transportation system. 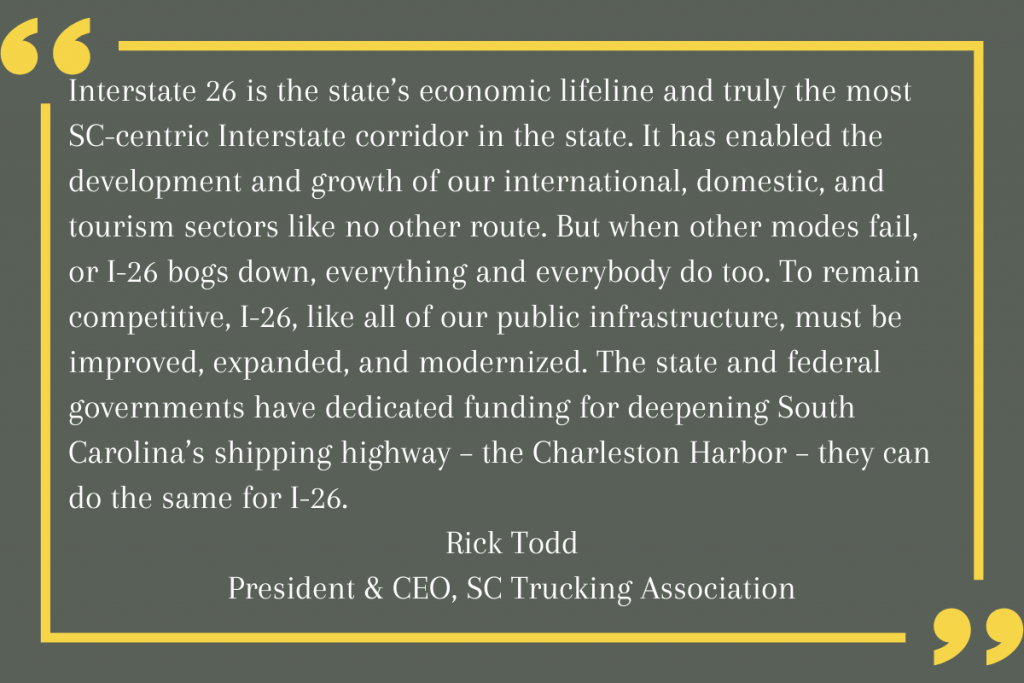 Since 2018, SCDOT has been able to start approximately 4,000 miles of paving projects statewide, partly due to the additional funding provided by Act 40.  According to the TRIP report, 18 percent of South Carolina’s major locally and state-maintained roads are in poor condition and 25 percent are in mediocre condition. Eighteen percent of major roads in the state are in fair condition and the remaining 39 percent are in good condition. 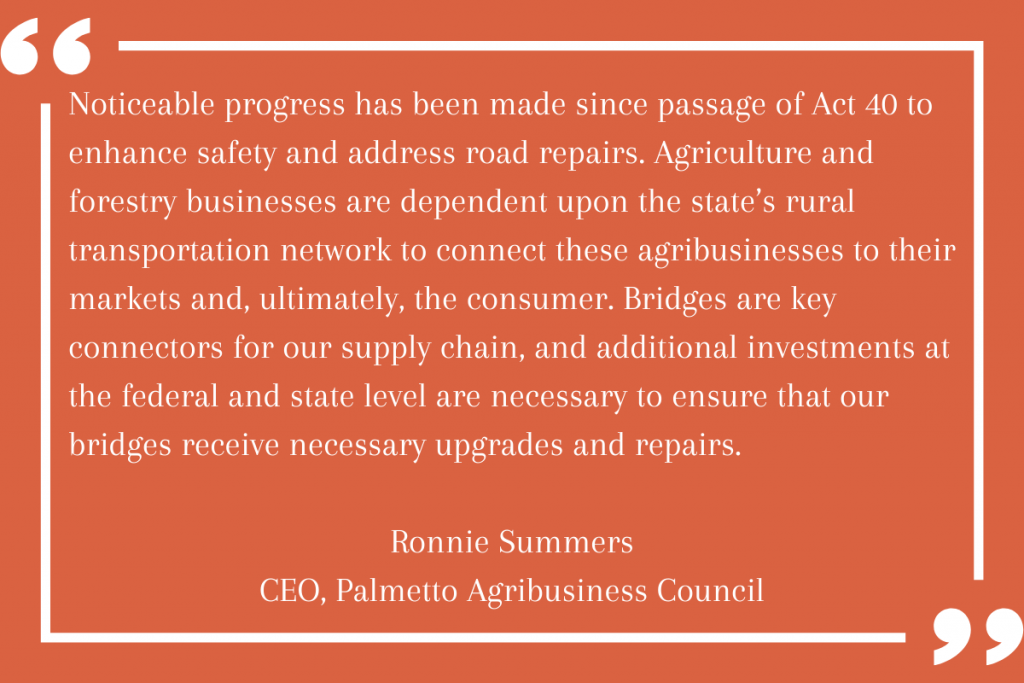 Traffic crashes in South Carolina claimed the lives of 5,018 people from 2015 to 2019. South Carolina’s overall traffic fatality rate of 1.73 fatalities per 100 million vehicle miles of travel in 2019 is the highest in the U.S. The fatality rate on South Carolina’s non-Interstate rural roads in 2019 was also the highest rate in the country and approximately three-and-a-half times higher than all other roads in the state (3.46 per 100 million vehicle miles of travel vs. 0.98).  The SCDOT has initiated a rural roads safety program targeting 1,957 miles of rural roads, which represents approximately five percent of the state’s rural roads, but account for approximately 30 percent of the state’s rural fatal and serious traffic crashes. Since passage of Act 40, safety improvements have been initiated on 635 miles of the 1,000 miles of rural roads to be addressed under the state’s current 10-year plan. These improvements include the addition of rumble strips, guardrails, raised pavement markers, paved shoulders and wider clear zones. 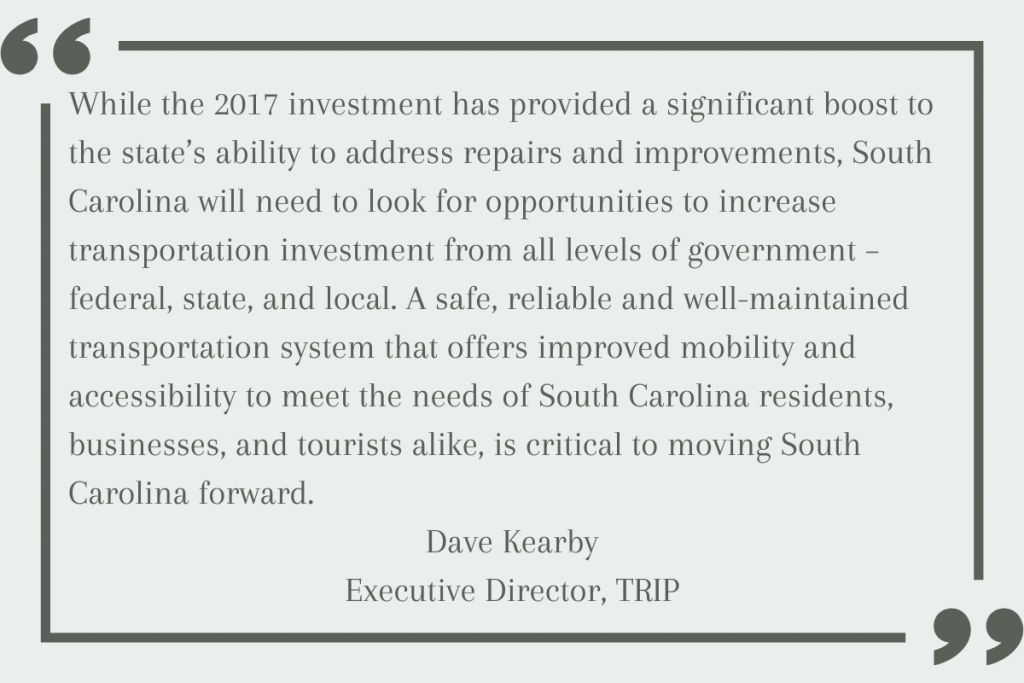