SCFOR’s annual meeting was held on Tuesday, November 16, at the Hall at Senate’s End in Columbia. We welcomed nearly 140 people for an afternoon of networking, education, and a conversation on the factors driving the future of South Carolina’s infrastructure.

Many Opportunities on the Horizon for SCDOT 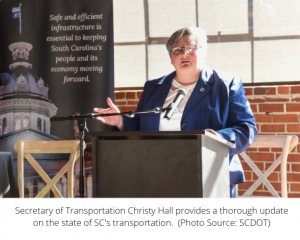 One thing is sure, the bipartisan infrastructure package (IIJA) offers an excellent opportunity for SC to step up and boost the state’s 10-year plan. However, Secretary Hall was very clear that in order for South Carolina to leverage the federal package to the fullest extent, additional recurring state dollars will be required. (Approximately $200 million.)

Without this matching money, over $750 million in federal funds due to SC will be left on the table, and SCDOT would not be able to tap into the billions of dollars available through new discretionary grant programs. South Carolina cannot afford to leave any money on the table! 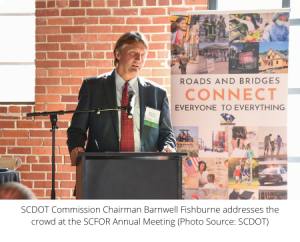 It is crucial that the public understands how SC will put these federal dollars to work, and we applaud the leadership of SCDOT and the SCDOT Commission for being proactive about determining how to utilize this funding to fill gaps in the current program and address areas that Act 40 was not intended to address. This includes traffic congestion, additional bridge repairs, pavements, safety enhancements to roads and intersections, drainage, and rest areas, just to name a few. 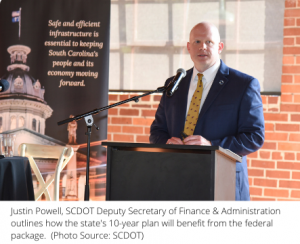 When it comes to roads, the American Rescue Plan funds provide a rare opportunity to buy time on a project of statewide importance and improve a notoriously unreliable and dangerous section of interstate – specifically closing the gap on I-26 between Columbia and Charleston. The allocation of $360 million to this project would boost existing projects in the pipeline to improve the I-26/I-95 Interchange, widen nearby segments, and segments outside of Columbia.

You will recall that this project is one that has been supported by Governor Henry McMaster, as well as the use of ARPA funds and budget surplus revenues for building a segment of I-73 to connect US 501 with I-95. (An estimated $300 million is needed for this project.)

Ultimately, the legislature has the final say on these allocations.

Senators Tom Davis (R-Beaufort), John Scott (D-Richland), and Ross Turner (R-Greenville) joined us to talk about their work as a subcommittee and the importance of being proactive and transparent about our funding policies. 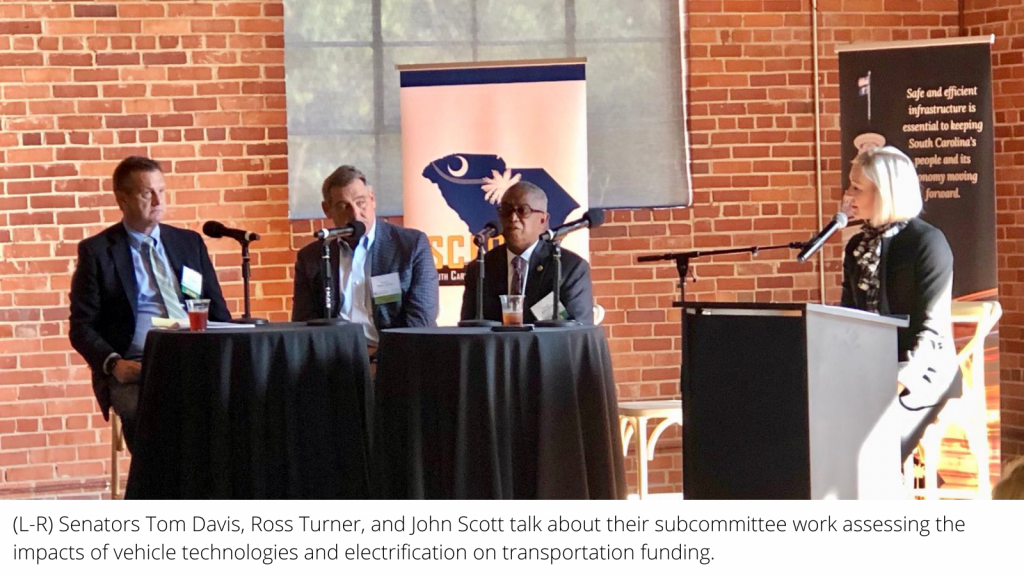 Senator Davis chairs the special Senate Critical Transportation Infrastructure Funding Modernization subcommittee. While it is clear that the shift to electric vehicles will be an evolution, the conversation will evolve into more than just transportation funding. From the location of charging stations to the sheer capacity of the power grid, policymakers at all levels of government must take a lot into consideration as they look to accommodate an electric vehicle market.

SCFOR applauded the Senators for beginning this discussion about advancements in vehicle technologies and electrification early.

We were able to have a great discussion with our friends from the Municipal Association of SC (MASC) and the SC Association of Counties (SCAC) about the importance of local funding mechanisms and how counties and cities are gearing up to put the one-time ARPA dollars to work. 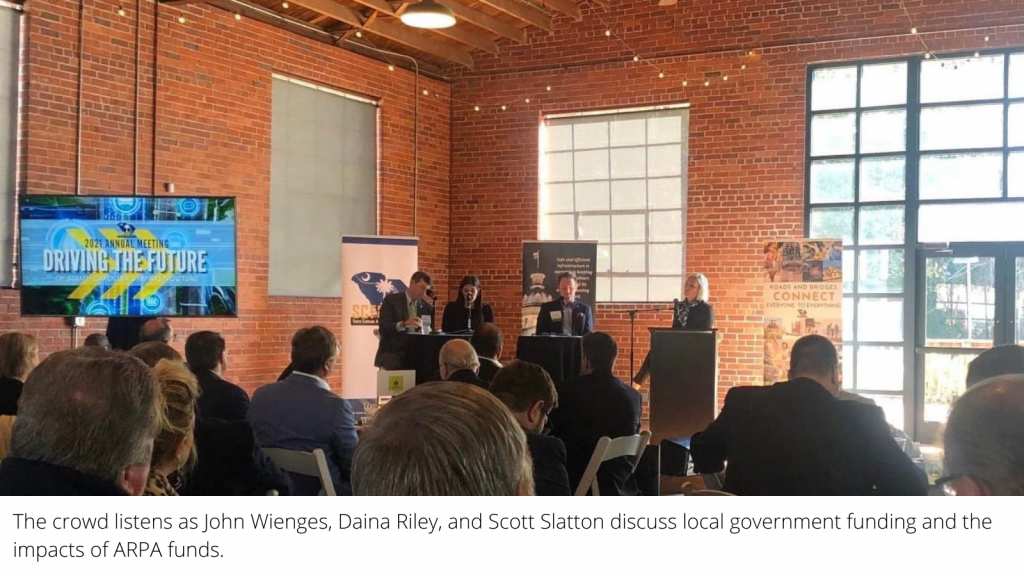 Our final panel of the day focused on the ongoing discussions in respective subcommittees in the House and Senate regarding ARPA allocations. 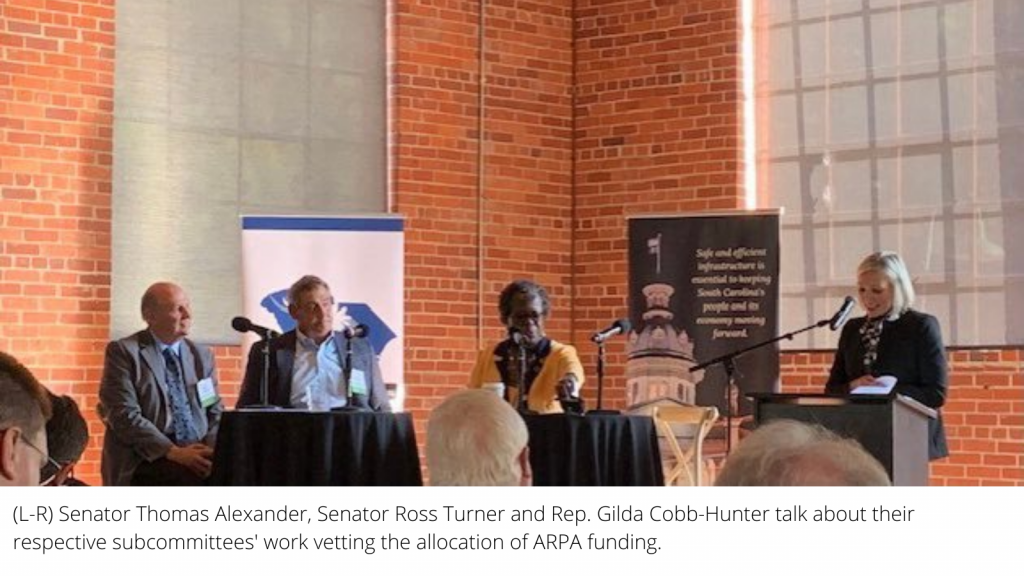 The ARPA funds are expected to move along with the budget process, which begins in the House. Rep. Gilda Cobb-Hunter (D-Orangeburg) touted the importance of making statewide investments and ensuring that rural areas were not left behind, especially when it comes to physical infrastructure needs like water/sewer, drainage, and broadband. She also praised the widening of I-26, especially the improvements to the I-95/I-26 interchange.

Senators Thomas Alexander (R-Oconee) and Ross Turner (R-Greenville) agreed these dollars would have generational impacts, and there will be much discussion in the upcoming session over the allocations. Water and sewer improvements benefit communities of all sizes, and undoubtedly interstate improvements benefit everyone – whether they are direct users or not because we all rely on the supply chain.

We recognize that there are many entities requesting funds, and there is only so much to go around. However, we appreciate the candid discussion with this group.

It is clear that there is an emphasis on physical infrastructure, and legislators have a tough job ahead of them. So whether it’s roads or water, we can all agree these are necessary and good investments. 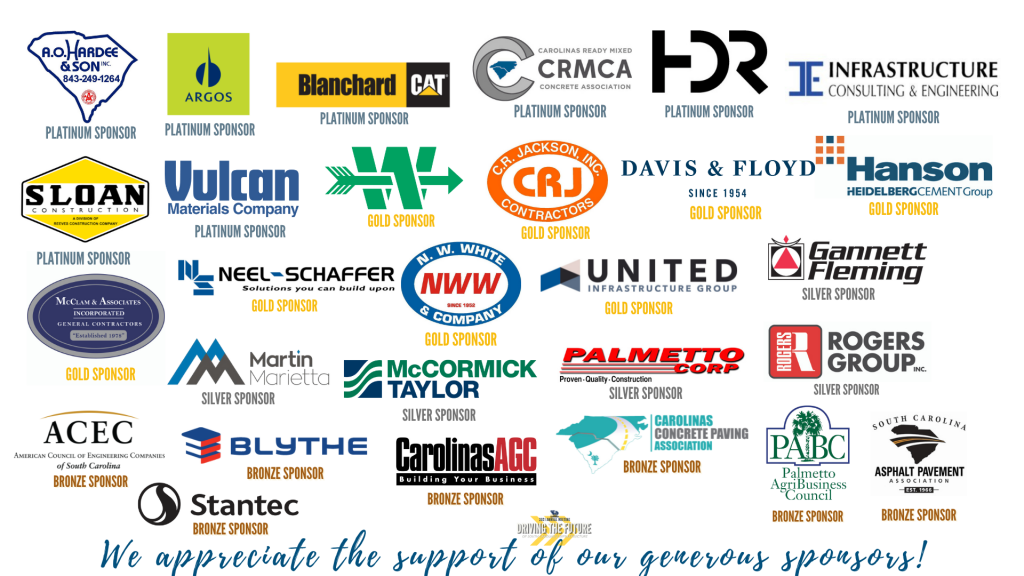