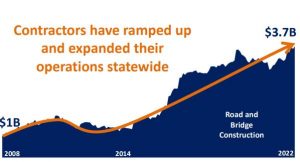 Thanks to the state’s investments in prior years, there is a record level of active road work going on across the state – approximately $3.7 billion. Secretary Hall was quick to praise the private sector industry response to make this work happen and keep projects moving.

Secretary Hall provided an overview of funding mechanisms, citing the importance of the diversity of revenue streams.

The “gas tax” provides the foundation for funding roads in South Carolina, generating approximately $910 million per year. These fees are allocated to the SCDOT, County Transportation Committees (CTCs), and one cent goes to the State Transportation Infrastructure Bank (STIB).

The state is making significant progress on the 10-year plan when it comes to addressing pavements, rural road safety, bridges and interstates. However, there is still much work to be done. 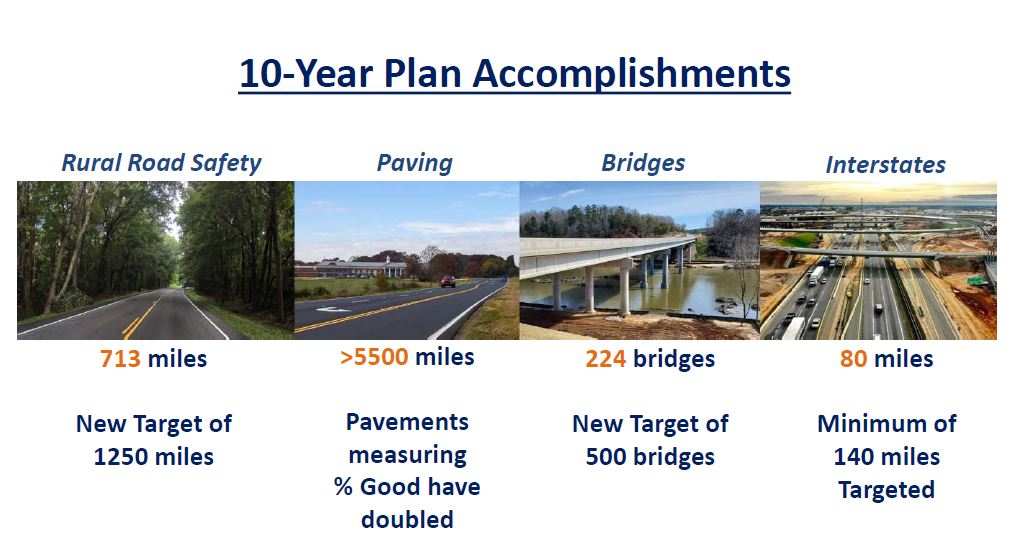 SCDOT anticipates an additional $250 million in federal funding from the Infrastructure Investment & Jobs Act (IIJA) that Congress passed last year. Secretary Hall emphasized the need to be able to utilize these federal dollars and grant opportunities to the fullest extent. In order to do this, the state needs to allocate a minimum of $100 million in recurring dollars to the SCDOT.

The recurring dollars would serve as a match to federal funds and bolster the state’s 10-year plan to help address challenges that current funding levels cannot address, including traffic congestion, bridges, pavements, drainage, and more.

There is a 4:1 return ratio on federal dollars – so this is an excellent opportunity to increase the buying power of our state dollars to address statewide needs.

Recurring dollars will also help put the state in an excellent position to utilize unused federal funds from other states (upwards of $50-$100 million) when they are redistributed in the fall. 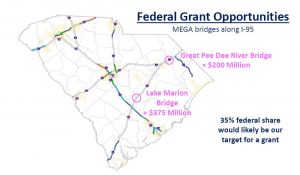 Regarding IIJA grant opportunities, Secretary Hall noted that the “Mega Bridge” discretionary grant program would be optimal for South Carolina to apply for, specifically to address two major bridges on I-95. This would be a tremendous opportunity to utilize federal dollars to help replace these aging bridges before they have problems that require them to be closed (which would be a nightmare for commutes and commerce). Applications for these bridge projects would ideally be funded with 65% state funds, with the federal government funding the remaining 35%. 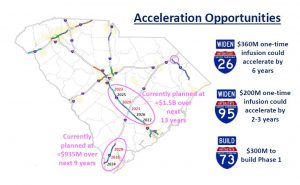 Any one-time funding allocations from the state surplus would be used to accelerate projects in the pipeline, specifically interstates. Currently, legislation in the House and Senate is pending that allocates $453 million of ARPA funds to be used for project acceleration. These dollars will go towards the widening of I-26 between Charleston and Columbia. Other one-time funding allocations could be used to accelerate the widening of I-95 beginning at the Georgia border or building the first segment of I-73.

Several Senators had interests in specific projects or issues in their area; however, each praised the work of the SCDOT for their efforts to put the state’s 2017 investment to work before delving into their specific questions. (Curious as to how those 2017 investments are being spent? Click here to learn more about the trust fund.)

Senate Transportation Committee Chairman Senator Larry Grooms (R-Berkeley) thanked Secretary Hall for her leadership and the work to improve the state’s transportation system. He said in prior years, they have heard that “less means less,” but it seems as if “more means more” when it comes to available resources and ongoing progress.

We couldn’t agree with Senator Grooms more. South Carolina has a tremendous opportunity to utilize federal resources to help meet the needs of our growing state. Pair these federal dollars with an investment at the state level, and South Carolina is in a position to continue to tackle statewide needs and accelerate projects in the pipeline.

The House has already passed their version of the budget, and they invested over half a billion dollars in transportation infrastructure. 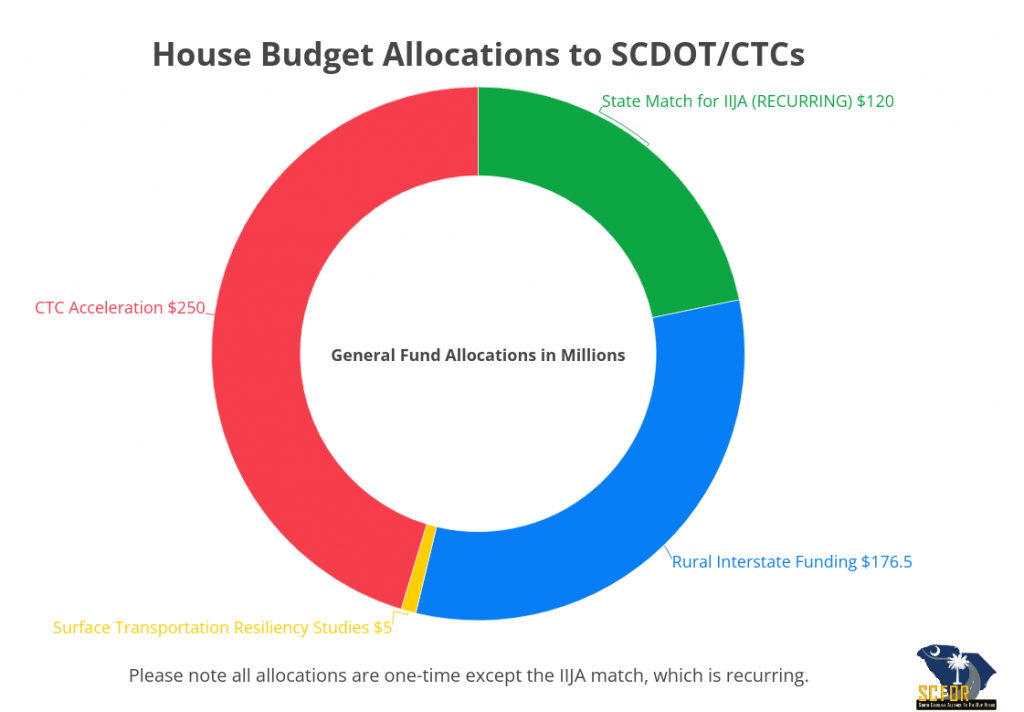 As the Senate begins their work on the FY22-23 budget, SCFOR will continue to advocate for one-time funding and, most importantly, recurring funds, which will play a critical role in the continued success of the state’s 10-year plan to keep SC moving forward.