Members of the Horry County delegation put in an all-out effort to include funding for I-73 in the Senate budget this week.

Republican Senators Luke Rankin, Greg Hembree, and Stephen Goldfinch offered numerous amendments throughout the day on Wednesday to include funding for the first segment of I-73.

Amendments ranged from allocating funds (the Senate reserved for their tax rebate) across infrastructure projects, including I-73, CTC acceleration, bridges, rehabilitation, etc. They also tried to entice Senators with a whole gamut of statewide needs, including raises for state employees, K-12 education, and the pension fund.

Late Wednesday evening, Senator Hembree made one last effort and asked his colleagues to adopt an amendment that would allocate $1 towards the project to give it one last chance during the budget conference committee. That amendment failed by a vote of 31-10.

While none of the amendments were adopted, the delegation’s efforts prompted discussion over the importance of funding infrastructure and the impacts that additional investments could make.

As we have previously reported, Senators incorporated their tax cut/rebate plan into their version of the budget, which left them with less money (approx. $1 billion) than the House when it comes to one-time allocations. 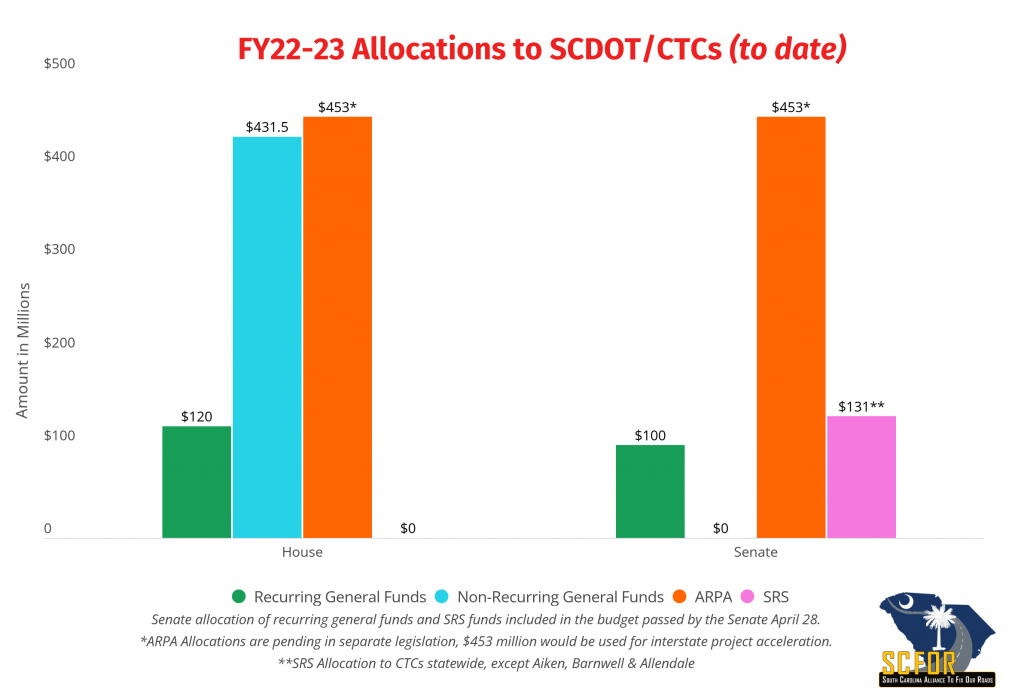 The budget will be returned to the House, and a conference committee will be appointed to reach a compromise on the spending plan in the coming weeks.

The good news is, both the House and Senate included recurring funds to SCDOT to serve as a match for federal dollars coming from the IIJA. These recurring dollars are vital to the continued success of the state’s 10-year plan and are critical for inclusion in the budget this year!