Commissioner Gene Branham (Dist. 5) passed the Chairman’s gavel to Commissioner Tony Cox (Dist. 7) at the conclusion of the January meeting.

“I’m honored to serve again as the Chairman of the Commission,” said Cox in a press release. “We’re making tremendous progress on our Strategic 10-Year Plan, and we will continue working hard on behalf of the people of South Carolina.”

Commissioner Cox joined the Commission in 2017. He has previously served as Chairman and Vice Chairman. He is a real estate professional with 40 years of experience. He recently retired as the executive vice president at Burroughs and Chapin Co., Inc. in Myrtle Beach.

Commissioner Pam Christopher (Dist. 3) was elected to serve as Vice-Chairman. Commissioner Christopher joined the SCDOT Commission in 2020. She is the President and CEO of the Anderson Area Chamber of Commerce.

SCFOR thanks Commissioner Branham for his leadership as Chairman over the past year, and we look forward to continuing to work with him.  Congratulations to Chairman Cox and Vice-Chairman Christopher! We look forward to working with them in their new roles.

Governor Henry McMaster was sworn into his second full term on Wednesday morning during a ceremony at the Statehouse. At the end of this term, McMaster will be the longest-serving governor in the state’s history.

For a copy of the Governor’s executive budget, click here.

It is important to remember that the Executive Budget is a recommendation to the General Assembly. The House and Senate will ultimately determine how FY23-24 dollars will be allocated over the next few months as budget deliberations ramp up.

The budget is initiated in the House, and work is already underway. Ways & Means subcommittees will continue to hear budget requests from respective agencies and entities over the next few weeks before taking their recommendations to the full Ways & Means Committee to craft a budget. The House is expected to take up the budget on the floor the week of March 13.

We applaud Governor McMaster’s continued support of infrastructure and setting the stage for additional investments to improve roads and bridges. We look forward to working with the House and Senate to support infrastructure investments during this year’s budget process.

The SC House met for the organizational session this week and, in the process, welcomed 27 new members to the chamber, one of the largest freshman classes in history.

In total, the House consists of 124 members (88 Republicans and 36 Democrats). With Republicans holding more than two-thirds of the seats, hypothetically, they can pass any legislation without Democratic support. However, that statement is solely based on mathematics – not politics. Compromise will continue to be as crucial as ever.

Speaker Murrell Smith (R-Sumter) was unanimously elected to preside over the chamber. In addition, Rep. Tommy Pope (R-York) was reelected to serve as speaker pro tempore.

The role of the Speaker is not one to be taken lightly, but it is clear that Speaker Smith is ready to get to work in the upcoming session and will be placing emphasis on the committee process. As Speaker, he is tasked with assigning House members to committees.

There was a bit of shuffling among the committee rosters, and there will be several new Chairs of key committees, including Ways & Means, Judiciary, and Education & Public Works.

Rep. Bruce Bannister (R-Greenville) was elected to chair the powerful Ways & Means Committee, which deals with all revenue issues – including the all-important state budget. Nearly half of the committee members are new to the group this year. View the roster here.

The EPW Committee is tasked with vetting legislation dealing with education, highways, railroads, and aviation. While Chairwoman Erickson placed a lot of emphasis on education during the organizational committee meeting this week, keep in mind, she moved from Ways & Means, where she chaired the Transportation & Regulatory Budget Subcommittee. So she is very familiar with the operations and finances of the agencies under EPW’s jurisdiction. View the EPW roster here.

The Republican supermajority also flipped the only Democratic chaired Committee to Republican control. Rep. Leon Howard (D-Richland) moved from being the Chairman of the Medical, Military, Public and Municipal Affairs Committee (3-M) to a spot on the Ways and Means Committee. The new chairwoman of 3M is Rep. Sylleste Davis (R-Berkeley).

With retirements and several incumbent losses, there will be 27 new members in the SC House of Representatives in 2023.

SCFOR congratulates all who were elected and re-elected to serve in the SC House, we look forward to working with you to keep SC moving forward!

The SCDOT held their September meeting on Thursday, September 15. Among the items on the agenda were consideration of proposed updates to the state’s 10-year plan as well as the FY23-24 budget.

SCDOT Commissioners approved updates to the state’s 10-Year Plan to fine-tune investments across programs to accommodate the new federal and state dollars.

Specifically, the revisions include boosts to the following programs:

Commissioners approved the SCDOT’s proposed FY23-24 budget, which will be submitted to the Executive Budget Office for consideration and ultimately serve as the basis for SCDOT funding/budget requests during the budget process in the 2023 legislative session.

The FY23-24 budget totals $2.685 billion, and the majority of revenues come from state sources. Approximately 89% of the funding that goes into SCDOT goes back into the system for improvements.

Since implementation of the 10-Year Plan in 2017, there has been significant progress to address repairs and improvements across the state.

*10-year plan revision chart and budget pie charts included in the above article are sourced from the SCDOT Commission Notebook 09/15/2022.

To maintain and improve our roads and bridges, South Carolina depends on federal funding and revenues from the state’s motor fuel user fee and other driver/vehicle-related fees. The SCDOT Commission workshop held on August 18 provided a thorough overview of how these dollars are put to work by SCDOT. 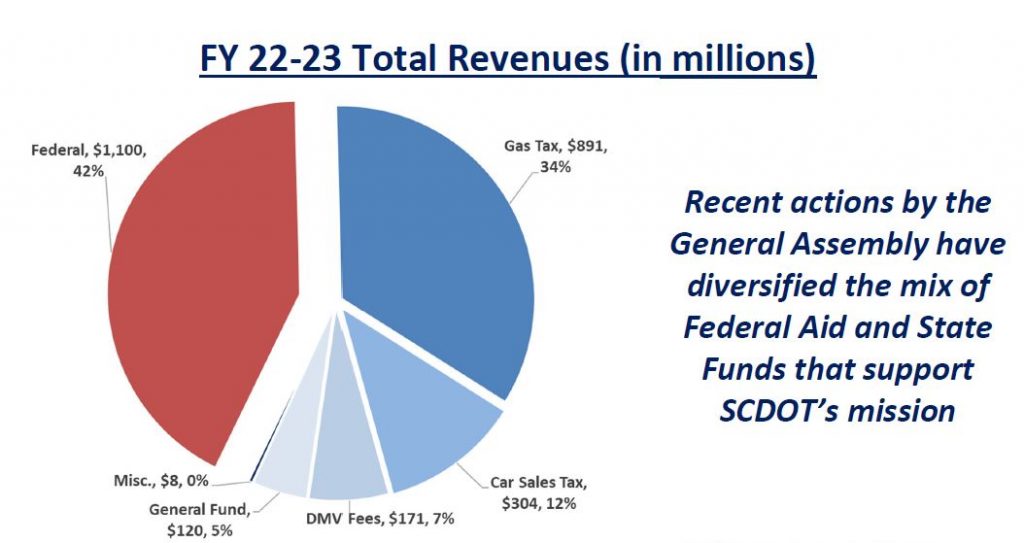 State funding makes up nearly 60% of SCDOT’s funding sources. This includes the 28.75 cent per gallon motor fuel user fee, which is the state’s predominant source of revenue. Learn more about how the motor fuel user fee is allocated here. 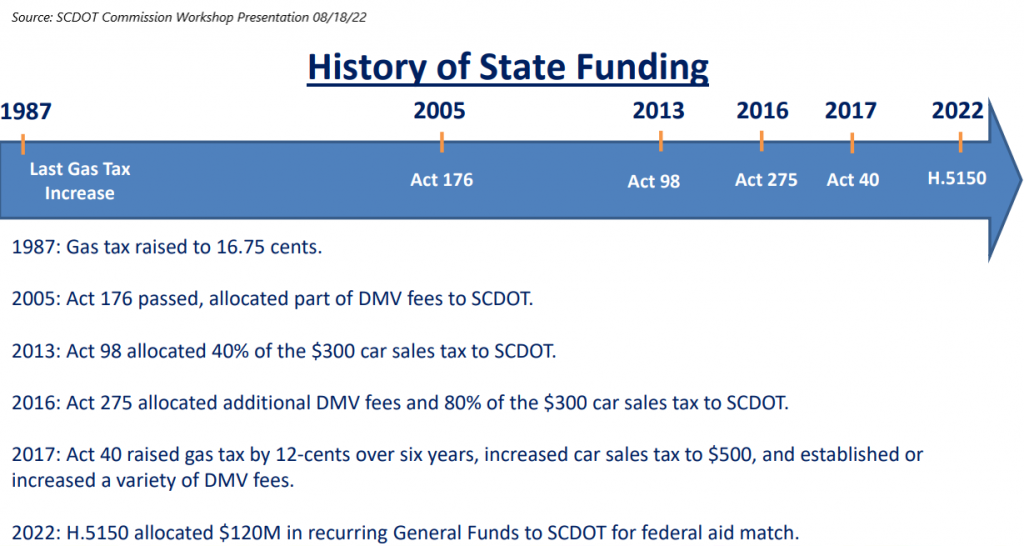 State dollars play a critical role in matching federal dollars. They are also the predominant source of funding for the pavement program.

SCDOT receives approximately $1 billion in federal funds. These funds come with specific requirements and restrictions. Because of this, they tend to be allocated to complex projects and used to fund various programs, including interstates, bridges, MPO/COGs, and safety.

These federal and state funds are allocated across various accounts used to fund SCDOT, with the two predominant accounts being the Highway Fund and the Infrastructure Maintenance Trust Fund (IMTF).

The Highway fund is funded by 16 cents of the motor fuel user fee, federal funds, Act 275 DMV fees, and other fines, fees, and interest. The Highway Fund supports all SCDOT operations, including maintenance, debt service, and matching federal dollars.

The IMTF is funded by new motor fuel user fees and other vehicle-related fees established in Act 40. The IMTF must be used to repair and improve existing roads and bridges. Details on this fund can be found here.

The general fund revenues ($120 million) are a new allocation from the legislature in 2022. This money will be used exclusively to match federal dollars associated with the Infrastructure Investment & Jobs Act (IIJA).

Approximately 89% of the funding that goes into SCDOT goes back into the system for improvements. 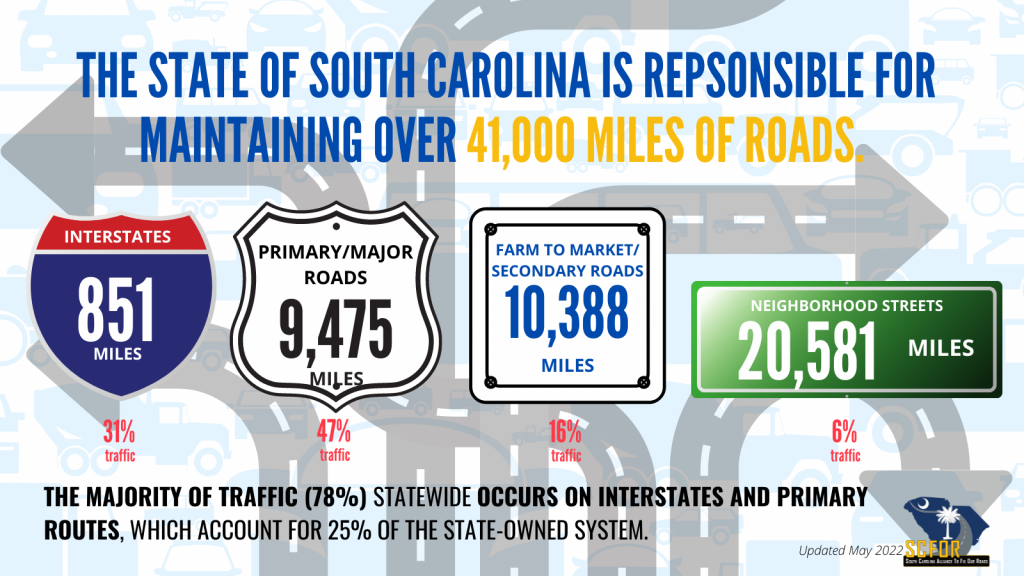