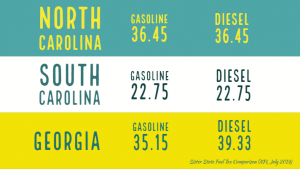 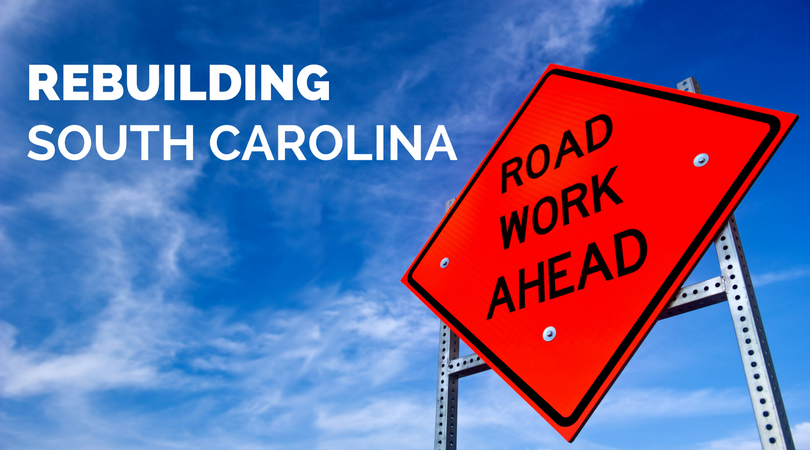 SCDOT has mapped out a decade-long plan designed to rebuild decaying roads and replace structurally deficient bridges across the state. The foundation of this mission begins on Saturday, July 1, with the Roads Bill being enacted into law.

The Roads Bill, a years in the making bipartisan initiative, comes after decades of under-investment in our highway transportation system. The legislation, approved by super-majorities in both the House and Senate, enables SCDOT to begin comprehensive fixes in a responsible, sustainable manner through the following fee increases.

The state’s gas tax, currently the second lowest in the nation, will increase for the first time since 1987. On July 1, 2017, the 2 cent increase will take effect and will increase by another 2 cents each year for six years – resulting in a 12 cent increase. At full implementation, the state’s gas tax will equal 28 cents per gallon, significantly less than our neighbors – Georgia’s 31 cents and North Carolina’s 35 cents.

Additionally, the vehicle sales tax will be raised – for the first time since 1981 – on July 1 along with other vehicle-related fees.

As a result, South Carolina’s lowest in the nation per mile transportation budget will receive an increase of roughly $800 million in annual, additional revenue by 2024.

The SC Alliance to Fix Our Roads President, Bill Ross, issued the following statement in response to SCDOT’s release:

“We applaud SCDOT and their monumental 10-year program aimed at rebuilding South Carolina’s decaying transportation system. This program is a direct result of the South Carolina Legislature’s approval of the comprehensive roads bill.

Moreover, these future projects would not be possible without the additional funding provided by South Carolinians and out-of-state motorists. While there are reasonable fee increases, the future return on our investment in safer, more efficient roads is unmatched.” 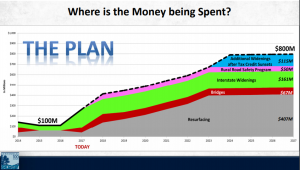 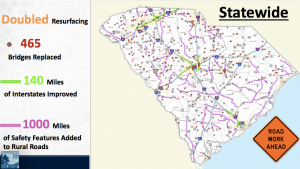 The 10-year program to rebuild South Carolina’s infrastructure
will focus on the following areas: 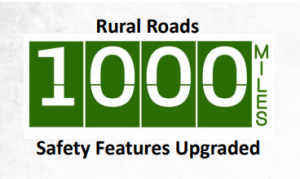 Rural Road Safety Program
South Carolina has the highest rural road fatality rate in the nation. As such, the new program uses targeted data to identify and implement needed safety features on 1,000 miles of the state’s deadliest roads.

DOT plans to replace 465 bridges over the next ten years, many of which are load-restricted and cannot be used by school buses or larger trucks. 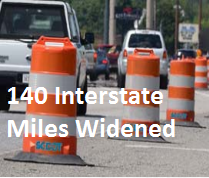 Interstate Widening Program
Using a “Fix it First” approach, SCDOT is currently working to improve 140 miles of existing interstate highways. As the revenue grows, the agency will be able to address additional miles. 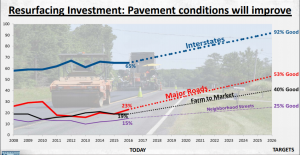 The department aims to double the resurfacing program. SCDOT aims to improve poor pavement conditions and eradicate countless potholes on interstates as well as the major routes that connect our cities, towns, and secondary roads.

View Projects in Your Area Below: 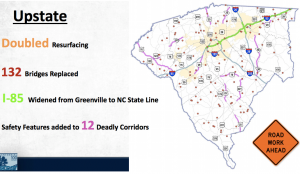 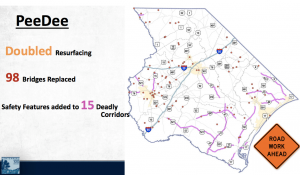 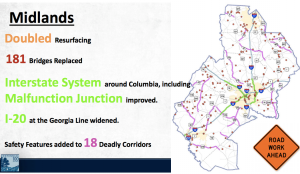 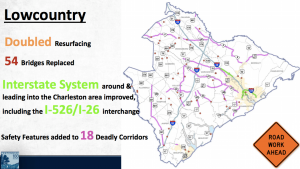 “Our roads fell into neglect over a 30-year period. We believe the 10-year plan can make great strides in rebuilding our system. The new funding will trickle into the Maintenance Trust Fund at first. But as funding increases in small increments over the next six years, South Carolinians and our visitors can expect to see more road and bridge construction all over the state with each passing year,” said Hall.

SCDOT will make periodic reports on the progress of the 10-year plan as revenue accumulates and as SCDOT engineers’ rebuilding project plans move into the construction phase.

Stay up to date with projects around the state by viewing DOT’s interactive maps on their website HERE.

South Carolina’s roadways are known as the best at being the worst. The state holds first place for the highest road fatality rate in the nation. Lack of infrastructure investment over time has allowed SC’s roads to crumble, resulting in hazardous conditions for motorists.

This legislative session, however, SC lawmakers voted to raise the state’s motor fuel user fee for the first time since 1987. The increased funding will provide SCDOT with the means to begin addressing the prevalence of highway fatalities.

The first step? Repairing dangerous rural roadways – as approximately 58% of traffic fatalities in the state occur on rural roads.

Due to the promise of increased funding, SCDOT has rolled out their Rural Roads Safety Program. Secretary Hall has stated that the program will target the “worst of the worst roads in our state.”

The department ranked roadways by prevalence of fatal and serious injury, run-off-road crashes, and average daily traffic. The data yielded 1,957 miles of rural road in desperate need of repair and tailor-fit solutions. Modifications will include engineering solutions to prevent vehicles from leaving the roadways, including rumble strips and wider shoulders.

Pending consideration of public comments and based on available funding, the projects will be recommended for inclusion in the Statewide Transportation Improvement Program (STIP).

If you would like to make a comment regarding the recommendations, you may fill out SCDOT’s Email Form. Comments will be accepted until the close of business on July 11, 2017.

While South Carolina’s infrastructure crisis will not be alleviated overnight, SCDOT is hard at work addressing the state’s most critical issues.